The Cortex-M3 has a special register called “Program Status Register (PSR)” that shows the execution status of the program.Generally, it is installed in microcomputers with a name like Condition Code Register (CCR), but the In Cortex-M3, in addition to the general CCR functions, it is possible to know the execution results of special instructions and the status of interrupts.

They can be accessed using move instructions (MRS/MSR instructions) between status registers and general-purpose registers, either as individual registers or as a combination of all three.Use the command name xPSR to access them all together.

An example of a description is shown below.

If you want to read only the interrupt number of IPSR, write as follows. Now, the contents of the IPSR are stored in Register 1.
MRS  r1 , IPSR ;


If you want to read the entire xPSR, write the following Now, the contents of xPSR are stored in register 2.
MRS  r2 , PSR ;

PSRs are stored on the stack during exception handling.

The following is an explanation of each bit of the APSR. 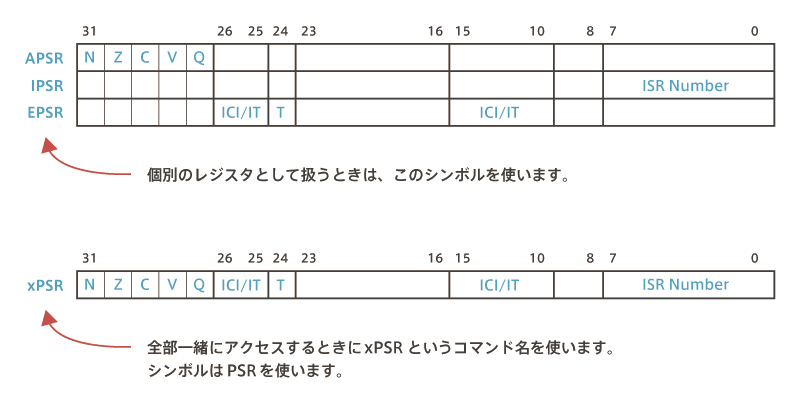 In “Part 4: Overview of the Instruction Set,” we wrote that”There is not enough space in the encoding space for Thumb 16-bit instructions such as the IT (if then) instruction, so instructions for functions that were not in the Thumb compiler were added in the Thumb-2 instruction.”The execution state of such an instruction is entered in the “Execution PSR”. This register contains two fields, a field shared by ICT/IT and a Thumb state bit.

Execution state field for the If-Then (IT) instruction.

This contains the number of instructions and execution conditions in the If-Then block.

Contains the currently active interrupt handling routine (ISR) number of the exception. The exception numbers are as follows. 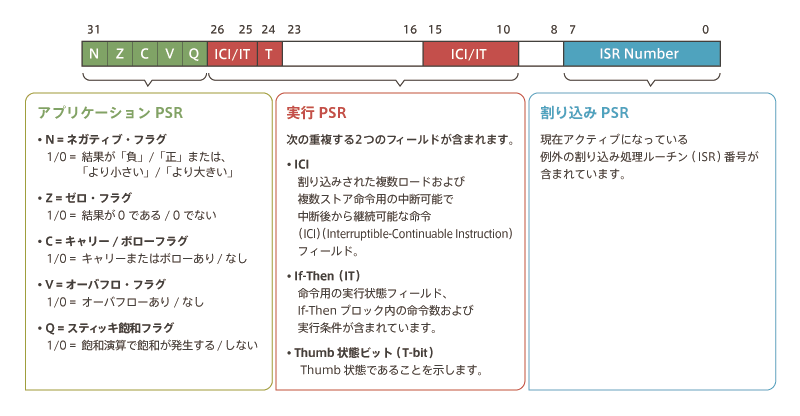 It is generally used for signal processing as shown in the figure below.For example, when amplifying an input signal, it is used to reduce the distortion of the signal by saturating it when the output exceeds a specified range.It can also be used for data conversion.It can also be used if you want to convert a 32-bit integer value to a 16-bit integer value.However, since the C compiler may not support the saturation operation instruction, it is necessary to check it. In such a case, you have to write it in assembler.